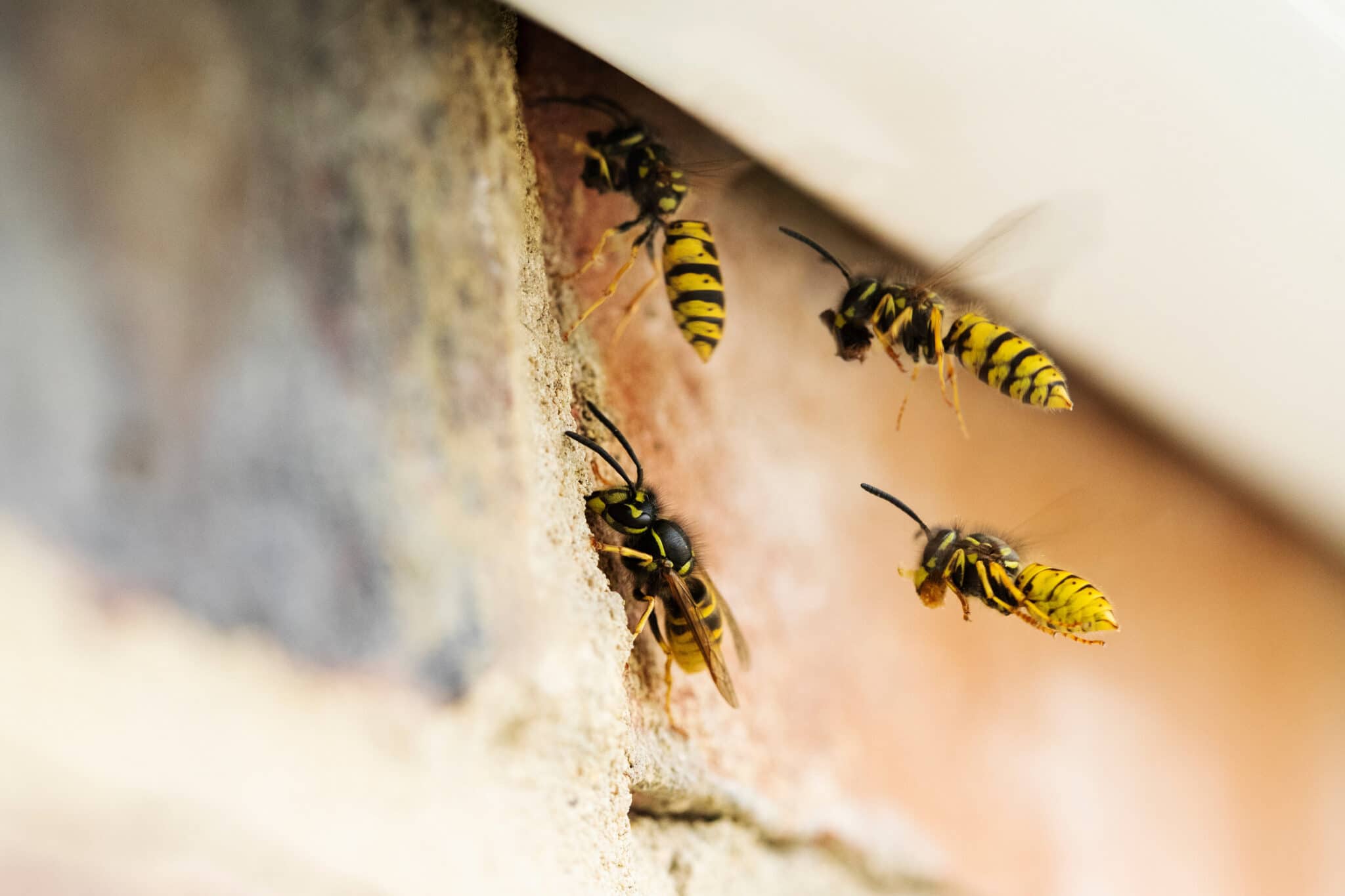 If you’re tired of being pestered by wasps, you may be wondering how to get rid of them. Wasps are an incredibly annoying pest, but don’t worry – there are a few tips to help you deal with them.

What is a wasp?

Wasps are members of the insect order Hymenoptera, which are a group of stinging insects. Their bodies are slender, smooth, and shiny. They have well-developed wings, and a small abdomen. Some species have an ovipositor, which lays eggs near a food source.

Most wasps are eusocial, which means they live in a colony with other wasps. A queen is the reproductive head of the colony, and she lays eggs. Workers take care of the queen and the queen’s young.

Social wasps are members of the family Vespidae. These wasps build nests in walls or other manmade structures. The wasp’s nest is made of paper-like material that the workers chew and enlarge.

The queen begins a new colony in spring. She lays about 100 eggs a day. Males and gynes are called before they head the colony.

There are hundreds of thousands of different species of wasps. Some have red, orange, or blue coloring. Others have black or yellow coloration.

They are sometimes mistaken for bees. But, they have different behaviors, habits, and stingers.

Social wasp colonies are considered annoying pests. If you get too close to the nest, you can be attacked.

One of the largest social wasps is the Asian giant hornet, which can reach five centimetres in length. Other species include the yellow jacket, the tarantula hawk, and the spider wasp.

In the UK, over 7,000 species of wasps exist. Over 14 million kilograms of prey are captured each summer by social wasps.

While wasps are a vital part of the ecosystem, their stinging abilities can be painful. When disturbed, they will inject venom into the victim. It is often painful, but it is not deadly.

Do wasps do any good?

A recent study from researchers at the University College London (UCL) examined the ecosystem contributions of 33,000 species of stinging wasps. They found that wasps are responsible for a number of important services, from pollination to pest control.

Wasps are a common sight during the warmer months of the year. Most people only notice species of wasps that nest near their home. But these insects are found across the globe and can be a nuisance during the winter months.

Wasps are predators of a wide range of insects, including spiders, flies, and caterpillars. However, they are not a common garden pest. In fact, some wasps are even beneficial for gardeners.

One study suggests that the presence of wasps contributes to the ecosystem by providing a beneficial antibiotic. This is because wasps have a compound in their venom called mastoparan. It has anti-cancer and anti-microbial properties.

Researchers found that wasps also help to prevent the spread of disease. Some wasps can also assist in the development of new medications.

There are over 1,000 species of social wasps, which live in huge colonies. These insects incorporate essential minerals into their nests.

Compared to honey bees, wasps have a bad reputation. While there are no known cases of wasps attacking humans, the risk of stinging is real. If you are attacked, keep calm and don’t try to brush them off.

Despite their negative reputation, wasps are a necessary part of the ecology. Many wereps are actually pest controllers, and they play a vital role in protecting our food supply and our health. Sadly, wasps are losing habitat and are being affected by climate change and pesticide use.

The US Forest Service has a webpage dedicated to wasps. Learn more about the ecological role of wasps and how to protect them.

Why are wasps so annoying?

Wasps are an annoyance to many people. However, they are very important to the ecosystem. They pollinate flowers, prey upon pest insects and even build nests.

There are over 7000 wasp species in the UK. Some of these are social and others are solitary. In general, solitary wasps do not sting or kill humans.

As the summer winds down, wasp colonies will die off. This can be a problem if you live in a neighborhood with a lot of wasps.

There are a few reasons why. First, wasps are aggressive during the fall because they have family obligations. Second, their food source is decreasing, contributing to their aggression. And third, they are changing their habits to better suit their new environment.

The best way to avoid getting stung is to brush away any wasps that are near you. They can be quite aggressive, especially if they feel they have been threatened.

Wasps are also attracted to sweet foods. You may see them hanging around fruit, particularly apples and peaches. Another source of sugar for wasps is honeydew produced by aphids. Fruits that are rotting and fermenting may attract wasps as well.

Although wasps are not as useful as bees in the spring, they are very useful throughout the summer. During this time, their larvae produce a liquid that is rich in sugars. These sugars are used by the adult wasps.

While wasps are not a menace in the spring, they are a definite nuisance in the late summer. If you live in a neighborhood with a large wasp colony, you should take extra precautions to avoid being stung.

How to get rid of wasps

Wasps are not only annoying, they can sting you as well. It is important to get rid of them before they become a problem. A few simple techniques are available to remove wasps and prevent them from returning.

The first step in removing wasps is to locate the nest. You can do this by watching for activity on your property. If you see signs, call a pest control service. They will be able to help you determine the severity of the infestation and take the necessary measures to eliminate it.

In order to treat the nest, you will need to seal the hole or crack. This is done by using a combination of soap and water. However, be careful not to directly contact the nest. Some people have had allergic reactions to wasp stings, and this is not recommended.

Another effective way of eliminating wasps is to install a wasp trap. You can find these at most hardware stores. Make sure you hang the trap in a place where it will be out of the way of people. After a while, the trap will fill up with wasps, so you will need to change it out.

If you have a severe allergy to wasp stings, you should seek medical attention. Using insecticides, a wasp trap, or sprays can be harmful to you. Therefore, the best option is to hire a professional pest control company. These professionals know how to safely remove wasp nests.

How to remove a wasps nest

Wasps are stinging insects that pose a risk to both humans and animals. It is important to know how to remove a wasps nest. The following steps can help you do the job safely.

First, you’ll want to evaluate the size of the wasps nest. If the nest is large, it may be best to call in a professional to do the work. A small wasps nest is easy to remove with the help of a long-handled scraper or a broom. You should also keep pets and children away from the area while you are working.

Next, you’ll need a bucket and a cloth bag. The bag should be free of holes and tied in such a way that it will stay in the water. Once the bag is in the water, you should wait eight hours.

Then, you’ll want to apply the insecticidal dust to the nest. This will kill the wasps. Be sure to follow the label’s instructions.

Once you’ve killed the wasps, you can dispose of the nest. Since wasps are toxic, you don’t want to allow your pet or other animals to ingest them.

You can also spray your wasps nest with insecticidal spray. You can use a hose-end sprayer to do the job. Make sure you’re wearing protective clothing, though.

You’ll need to keep in mind that wasps can become aggressive if they sense you’re trying to remove their nest. They’re less active at night, so you’ll need to act quickly.

You should also be sure to wear protective gear while removing a wasps nest. It’s not safe to do the job on your own. If you’re afraid of wasps, you might want to contact a professional to do the work for you.

KNOWN as the most romantic garden in Ireland, Altamont is an enchanting blend of formal and informal gardens located on a 100 acre estate. Whilst still little known, it ranks in the top ten of Irish gardens and is often referred to as ‘the jewel in Ireland’s gardening crown’

How to Get Rid of Japanese Knotweed

How to Deter Foxes From Your Garden

Get the latest updates and exclusive content delivered straight to your inbox – subscribe to our newsletter today!